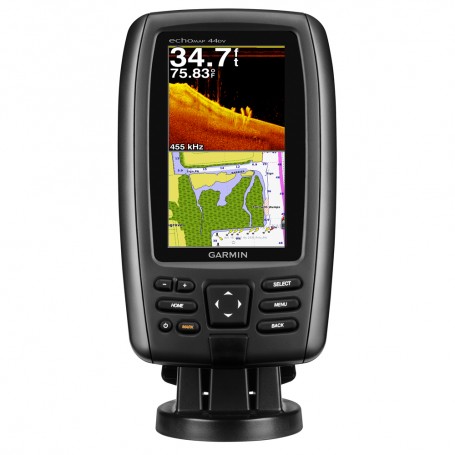 *Unit is Brand New, but comes in a brown box with mounting bracket, power cable and transducer*

You simply can't buy a better unit for the money.

The Garmin echoMAP™ Series of chartplotter/sonar combos gives you the clearest scanning sonar images on the water, the best preloaded LakeVü cartography and the most accurate GPS for its class.

echoMAP™ 44dv includes a 4.3-inch high-contrast color display with automatic backlight adjustment. Fast, responsive 5 Hz GPS/GLONASS refreshes your position and heading 5 times each second to make your movement on the screen more fluid. echoMAP comes with 1 transducer for 77/200 kHz HD-ID sonar and Garmin DownVü, the clearest scanning sonar on the water. It also supports Minn Kota® and MotorGuide® trolling motors with integrated transducers. The combo's cords plug directly into the mount, allowing you to quickly install and remove your device from power and the mount. Transom and trolling motor mount included.