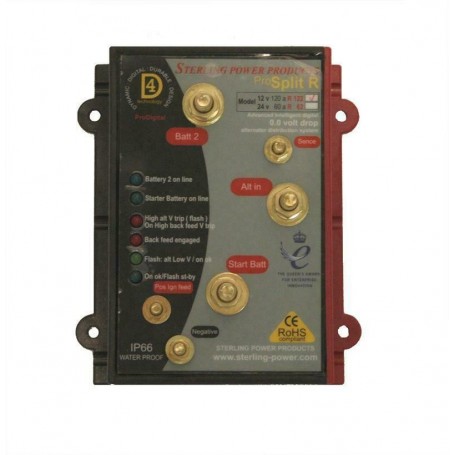 This product uses a micro processor to monitor the multiple battery banks which are to be charged by an alternator, it ensures the batteries are all charged in conjunction with each other and prevents any back feed through the device in the event of high loads on one battery bank.

This product uses a micro processor to monitor the multiple battery banks which are to be charged by an alternator, it ensures the batteries are all charged in conjunction with each other and prevents any back feed through the device in the event of high loads on one battery bank. The system also has the ability to disconnect the alternator and individual battery banks in the case of problems caused by the alternator or other power items in the system. It does all this and still offers only a max voltage drop of less than 0.01 volt, much less than any so called 0 volt drop mossfet / diode system. Many so called 0 volt drop systems simply do not come close. The Mastervolt battery mate is as high as 0.6 volts at full power (where it counts) while the Sterling is at 0.09 volts under full load conditions, a 600% performance improvement over the “Mastervolt” unit.

How does the unit function?

This unit on the surface looks like a simple device; however this is a very complex software control device with in excess of 1000 lines of code. Under normal operation the unit has a simple operating mode, however like all Sterling product being engineers we are not only concerned about normal operation conditions we like to build into our products as much safety and control as possible to both protect your electrical system and ensure the available power is directed to where it is required most but also ensuring that the engines battery is always charged.

What is the problem? Voltage drop across splitting systems (such as diodes) will cause poor performance with the charging of the batteries, however this can be compensated for by using things like advanced regulators or battery sensed alternators, however this in its self can cause problems with other batteries in the circuit.

All boats have at least two battery banks some have three. These tend to be the engine start battery, the domestic battery bank (please note that if you join three or four batteries together in your domestic battery bank it is still one battery), and the bow thruster battery. Having introduced 2 or 3 battery banks onto your boat, the problem then is how do you charge them from one alternator source (additionally, we offer these units w/ 2 alternator inputs, allowing two alternators to combine and charge a single housebank).

To understand what this product does we must first understand the problem. Please find a few examples below:

Example 1 is a typical split charge diode installation with a standard alternator with no advanced regulator or battery sensing regulator. The test assumes the alt is a 60 amp alternator, the diode is a 70 amp diode and there is average cable run between the alternator and the battery bank. The alternator voltage is assumed to be about 14.2 volts, however in real life this could vary from 13.9 to 14.8 volts depending on the manufacture and the internal regulator fitted to the unit. The important voltages to note for example 1 is the fact that the alternator produces 14.2 volts, but by the time it gets to the domestic battery it is only 12.8 volts, this is a appalling voltage and would result is you never charging your battery bank & shortening the life of your batteries. However note that the engine battery is 13.6 volts. (note this higher voltage, not a problem in this case, but the phenomenon will cause a problem outlined in later examples). The reason for this is because that at 60 amps the voltage drop across the diode to the domestic battery is 1 volt, however because the starter battery is almost full it is only drawing a few amps from the alternator and so its voltage drop is only going to be about 0.4 amps (remember, the voltage drop across a diode is not linear, it is proportional to the current flow, i.e. the more current flow through a diode the greater the voltage drop). Conclusion: in example 1 there is no danger to anything but there is an appalling low charge rate presented to the batteries.

Example 2 is replacing the standard alternator regulator with a battery sensed regulator, this in effect tells the alternator to provide 14.2 volts at the domestic battery bank (or at the end of the battery sensed cable) regardless of what voltage the alternator has to produce to achieve this goal. This will improve the charging rate at the domestic battery, i.e. you can see that the voltage will rise on the battery from 12.8v in example 1 to 14.2v in example 2. However, when the voltage is checked through the system, taking into account the voltage drops across the diodes, the engine battery voltage is now 15.2v this voltage would rise even more if the cables were longer. For example, if you had 4 or 5 metres of cables then the voltage drop in the cables could be up to 1 volt. This would drive up the starter battery by another 1 volt etc etc.

Conclusion: in example 2, the starter battery should be an open lead acid type. In the short term this battery would simply gas a little, and regular maintenance & addition of water would ensure the battery is OK. However, with a sealed gel or agm battery in this example, overcharging the batteries would destroy the batteries (so avoid gel, sealed and agm batteries on advanced charging systems).

Example 3 is pretty much the same as example 2, except a modern advanced regulator will push the batteries up to 14.8 and in some cases the new calcium calcium batteries could go as high as 15.4 volts. This simply adds another 0.6 volts onto example 2 with the same conclusions.

The solution: Protect your investment in your batteries and install a Sterling Power Zero Volt Drop Battery Isolator. If the voltage drop across the splitting diode is eliminated for the domestic and starting battery, then there would be no excessive rise in voltage on the starter battery, and charging voltage on the starting battery would be the same as the voltage provided to the domestic battery bank. This would prevent excessive gassing taking place and prevent excessive water loss in the starter battery. There are many additional advantages associated w/ using a Sterling Power Pro-Split-R Zero Drop Battery Isolator.